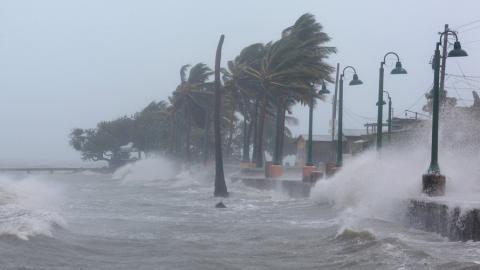 Island systems are among the most vulnerable to climate change, which is predicted to induce shifts in temperature, rainfall and/or sea levels. Our aim was: (i) to map the relative vulnerability of islands to each of these threats from climate change on a worldwide scale; (ii) to estimate how island vulnerability would impact phylogenetic diversity. We focused on monocotyledons, a major group of flowering plants that includes taxa of important economic value such as palms, grasses, bananas, taro. Islands that were vulnerable to climate change were found at all latitudes, e.g. in Australia, Indonesia, the Caribbean, Pacific countries, the United States, although they were more common near the equator. The loss of highly vulnerable islands would lead to relatively low absolute loss of plant phylogenetic diversity. However, these losses tended to be higher than expected by chance alone even in some highly vulnerable insular systems. This suggests the possible collapse of deep and long branches in vulnerable islands. Measuring the vulnerability of each island is a first step towards a risk analysis to identify where the impacts of climate change are the most likely and what may be their consequences on biodiversity.