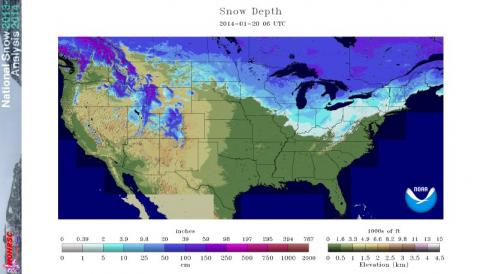 The amount of snowfall received during the winter often has an impact on the amount of soil moisture available at the start of a new growing season. At regional and local scales, water resource managers, flood forecasters, and farmers need to know how much water is in snow and when it will melt. On a larger scale, runoff from melting snow feeds streams and rivers that supply water for agriculture and cities. Knowing when and how quickly snow will turn to water is essential for forecasting if water from snowmelt will soak into the ground or cause flooding. NOAA produces several projects that can be used to monitor snowfall and snow cover throughout the winter and into the growing season.

The National Operational Hydrologic Remote Sensing Center provides comprehensive snow observations, analyses, datasets, and map products for the Nation. Snow depth maps and animations are a part of their national analyses suite of snow products. Maps can be chosen for dates back to 2003 for the nation and specific regions.

Recent U.S. snowfall and snow depth maps are available from NOAA’s National Climatic Data Center (NCDC) for the most recent one, two, three, and seven-day period by state or for the entire contiguous United States. An interactive, GIS-based U.S. snow monitoring map is also available from NCDC, with data back to 2006.

NCDC’s Regional Snowfall Index ranks significant snowstorms that affect the eastern two-thirds of the United States on a scale from one to five, placing snowstorms and their societal impacts into a historical perspective on a regional scale.

Preliminary U.S. daily snowfall and snow depth amounts collected from the National Weather Service (NWS) Cooperative Observer stations and NWS First Order stations are also available from NCDC. These daily observations are available as a text file for each month from July 2005 to the present.