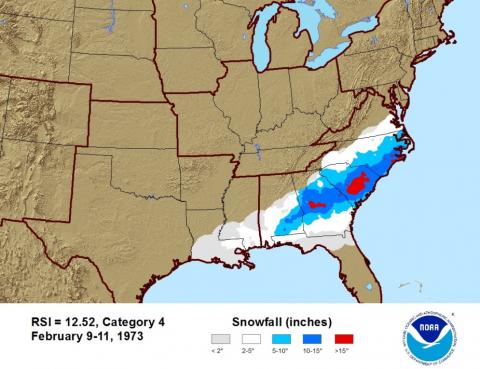 NOAA’s National Climatic Data Center (NCDC) produces the Regional Snowfall Index (RSI) for significant snowstorms that impact the eastern two-thirds of the United States. The RSI uses the area and amount of snowfall combined with the population in the affected area to rank snowstorm impacts on a scale from 1 to 5, similar to the Fujita scale for tornadoes or the Saffir-Simpson scale for hurricanes.

The RSI demonstrates the importance of placing snowstorms and their societal impacts into a historical perspective on a regional scale. For example in February 1973, a major snowstorm hit the Southeast affecting areas not prone to snow. The storm stretched from the Louisiana and Mississippi Gulf coasts northeastward to the Carolinas. Over 11 million people received more than 5 inches of snow and three quarters of a million people in Georgia and South Carolina felt the effects of over 15 inches of snow. Without putting it into regional context, this storm might not have been recognized as a major snow event even though it is ranked among the top 10 snowstorms for the Southeast by the RSI.

NCDC has analyzed and assigned RSI values to over 500 storms as far back as 1900, and new storms are added operationally. This range of values allows the RSI to put the regional impacts of snowstorms into a century-scale historical perspective. The index is useful for the media, emergency managers, the public, and others who wish to compare regional impacts between different snowstorms. The RSI and Societal Impacts Section of the website provides the regional RSI values for particular storms as well as the area and population of snowfall for those storms. The area and population are cumulative values above regional specific thresholds. For example, the thresholds for the Southeast are 2, 5, 10, and 15 inches of snowfall while the thresholds for the Northeast are 4, 10, 20, and 30 inches of snowfall.