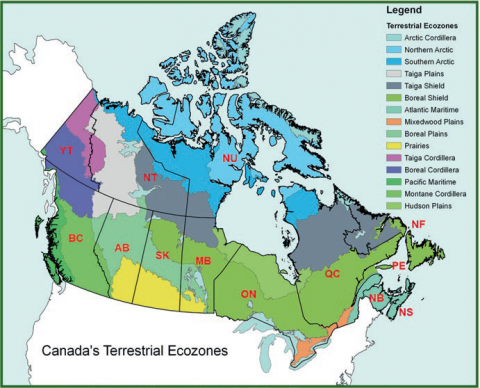 Canada is home to about 5087 species of higher plants of which 25% were introduced to Canada either deliberately or by accident. The richness of botanical species is highest in the southern, more densely settled parts of the country. About 364 native Canadian species have direct or potential use in crop development for various usages with particular emphasis on use for berries and as forages. The use of more than 600 plant species by indigenous people for food, medicine, or spiritual reasons is documented, and they practiced agriculture prior to colonization by Europeans with
cultivations of corn, garden bean, squash, sunflower, and tobacco. Only a few native species are crop wild relatives of major agricultural crops such as 14 species of the genus Helianthus L., which are related to cultivated sunflower. Taxonomists have made major contributions to recognize the potential of the Canadian flora from a utilitarian aspect. Plant breeding in Canada has been done by the government of Canada, by universities, and, more recently, also by the private sector. The focus has been on major crops, while the activities in forages and minor crops have decreased. Canada
maintains a national genebank for ex situ conservation (Plant Gene Resources of Canada). More activities to enhance the complementarity between in situ and ex situ conservation should be undertaken in Canada. The potential of native rangeland plants or weeds as genetic resources is emphasized. The “integrating genebank” is suggested as an ambitious concept. In order to maintain the future options Canadian biodiversity holds for enhancing life and livelihoods, a national strategy is required.

This Chapter is part of North American Crop Wild Relatives, Volume 1 (see attachment below containing the introduction if interested in acquiring the entire volume and looking into other chapters).