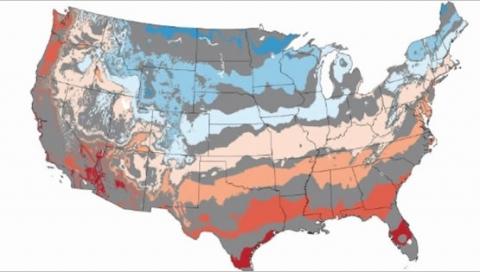 Climate plays an important role in agriculture, commerce, industry, transportation, and our everyday lives. Freezing temperatures and frost occurrence often adversely affect all of these areas of society, especially operations with principal activities outdoors. One of the most significant hazards of frost/freeze conditions is in the agricultural industry, where late spring freezes, early fall freezes, and short growing seasons can seriously impact plant production and crop volume. Scientists are seeing a shift in frost/freeze dates and in growing season durations as the climate changes. These changes put plants at an increased risk of experiencing late season frost/freeze events, which has prompted the agriculture industry to change crop varieties to adapt.

Examining historical climate records can help decision makers determine when to plant crops and what varieties to plant. In 2012, NOAA released a supplement to the 1981–2010 Climate Normals that includes frost/freeze date probabilities, probabilities of frost/freeze occurrence, and growing season length Normals.

Climate Normals are the average values of meteorological elements, including temperature and precipitation, over 30 years. Frost/freeze date probabilities and growing season length Normals are based on the first and last “killing freeze” of the growing season. A killing freeze is, essentially, a cold snap that hinders plant growth, and this temperature threshold varies from one plant species to another. Therefore, we use the term “frost/freeze” to indicate cold weather impacts across various temperature thresholds between 16°F and 36°F.

Users can access supplemental Normals, such as the frost/freeze Normals, under “Annual Climate Normals” in the Climate Data Online system.