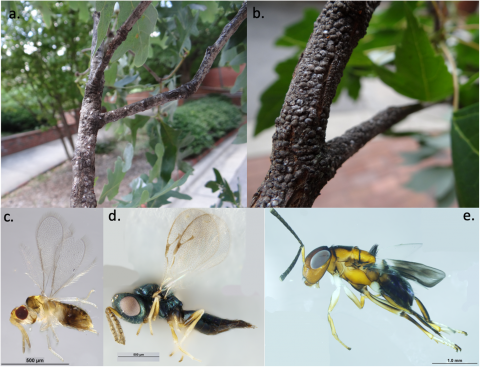 Urban trees serve a critical conservation function by supporting arthropod and vertebrate communities but are often subject to arthropod pest infestations. Native trees are thought to support richer arthropod communities than exotic trees but may also be more susceptible to herbivorous pests. Exotic trees may be less susceptible to herbivores but provide less conservation value as a consequence. We tested the hypotheses that native species in Acer and Quercus would have more
herbivorous pests than exotic congeners and different communities of arthropod natural enemies. The density of scale insects, common urban tree pests, was greatest on a native Acer and a native Quercus than exotic congeners in both years of our research (2012 and 2016) and sometimes reached damaging levels. However, differences in predator and parasitoid abundance, diversity, and communities were not consistent between native and exotic species in either genus and were generally similar. For example, in 2012 neither predator nor parasitoid abundance differed among native and exotic Acer congeners but in 2016 a native species, A. saccharum, had the least of both groups. A native, Q. phellos, had significantly more predators and parasitoids in 2012 than its native and exotic congeners but no differences in 2016. Parasitoid communities were significantly different
among Acer species and Quercus species due in each case to greater abundance of a single family on one native tree species. These native and exotic tree species could help conserve arthropod natural enemies and achieve pest management goals.