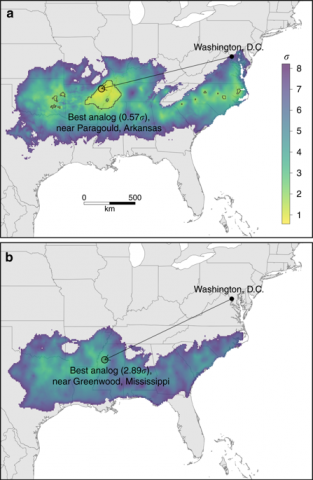 A major challenge in articulating human dimensions of climate change lies in translating global climate forecasts into impact assessments that are intuitive to the public. Climateanalog mapping involves matching the expected future climate at a location (e.g., a person’s city of residence) with current climate of another, potentially familiar, location - thereby providing a more relatable, place-based assessment of climate change. For 540 North American urban areas, we used climate-analog mapping to identify the location that has a contemporary climate most similar to each urban area’s expected 2080’s climate. We show that climate of most urban areas will shift considerably and become either more akin to contemporary climates hundreds of kilometers away and mainly to the south or will have no modern equivalent. Combined with an interactive web application, we provide an intuitive means of raising public awareness of the implications of climate change for 250 million urban residents