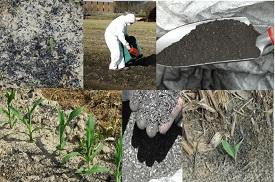 Biochar is a term used to describe charred, organic material that is applied to soils with the intent to improve soil properties. Many sources of organic matter may be used, but can impact the properties of the biochar. Biochar differs from charcoal because its components are specially formulated and optimally balanced for soil. Current interest in biochar has been inspired by the historical use of charcoal to amend “terra preta” and “terra mulata” soils in the Amazon Basin. These soils were high in crop productivity in an otherwise unproductive soil type, and resulted from the use of charred biomass by the areas’ inhabitants. The study of these ancient soils has demonstrated the benefits and persistence of charred matter in soils for long spans of time.

What is it made from?
Biochar is made from the pyrolysis of organic biomass. In simple terms, waste materials are heated in the absence of oxygen to break chemical bonds of volatile matter within the biomass. This process results in a carbon-enriched co-product (along with heat energy and syngas/bio-oils) called biochar. Biochar has been made from most organic wastes such as wood chips, crop residues and manures; emphasis is placed on using currently discarded waste streams.

How does it benefit soil?
Many benefits to soil characteristics have been demonstrated by incorporating biochar. Increases in water retention, microbial activity and plant yields have been documented in addition to reductions in nutrient leaching and fertilizer inputs. These benefits are realized due to the porous nature of biochar, which allows for the adsorption of nutrients, water and other soil inhabitants. These benefits are potentially superior to those of other organic sources due to the longevity of biochar in the soil.

How does it benefit plants?
Studies show plant growth and fertility increase when soil quality is improved by biochar. Numbers of plant-enhancing microorganisms, such as Trichoderma, are boosted in soils amended with biochar. These microorganisms play a role in eliciting a benefit known as systemic-induced resistance (SIR). SIR can result in increased defense mechanisms that allow plants to deter and combat insect and disease attacks.

Are there any other benefits?
Biochar production retains carbon while producing energy and synthesis gas, harboring the potential to be carbon negative. The stability of biochar in soil promises to be a combatant against atmospheric CO2 increases and an ally in reversing heat-trapping gases in our atmosphere.

Biochar Formulation as a Soil Amendment in the Agricultural, Forestry, and Environmental Sectors