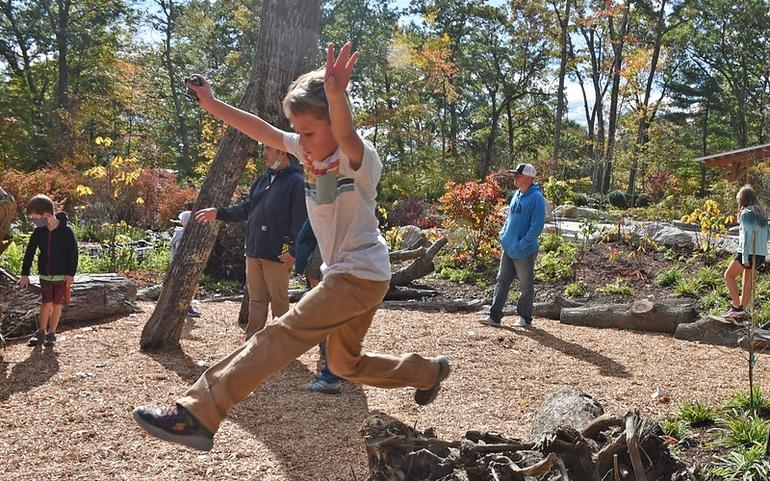 BOYLSTON, MA —November 17, 2021— Tower Hill Botanic Garden in Boylston is nearing completion of a $15-million construction project aimed at widening its audience, and will debut its new renovations on Nov. 26 at the beginning of its annual, month-long holiday Night Lights event.

The project, which includes parking lot expansions, accessibility upgrades, and, most notably, a children’s garden, has been in conception for 12 years, but broke ground in January, said Tower Hill CEO Grace Elton.

“We're really trying to make sure that the whole community realizes that this is a place for them,” said Elton. “That often starts with the kids.”

Known as The Ramble, the 1.5-acre garden marketed for children includes a waterfall, amphitheater, and several multi-use spaces for educational and recreational purposes. The space meets accessibility standards of the Americans with Disabilities Act, including specialized woodchip ramps leading into the garden, and a 100% water permeable pathway made of recycled tires.

Tower Hill has doubled its parking space to 500 spaces and added 40,000 new plants.

The construction projects cost $12.75 million, with an additional $2.25 million spent on campaign costs and land acquisition.

“We anticipate that opening this garden will have a dramatic increase for our visitation, as well as our membership,” Elton said, adding other botanical gardens who added a children’s garden saw an increase of 40% in visitation.

Tower Hill has already seen tremendous growth over the last several years, so much so the organization had to create a new master plan in 2016 to adjust, said Elton. In 2019, the 170-acre gardens had 167,000 visitors, which was double its 2014 visitation.

While guests have been plentiful, Elton said the organization is pushing for a more diverse group.

“Our typical audience is people who already feel comfortable in a garden,” she said, listing retirees and garden club members. “Calling it a children’s garden really attracts families in a different way than calling it a botanical garden.”

Tower Hill has been working with a community advisory committee to collaborate with leaders from varying communities and understand how to engage different groups.

Elton said a common critique is the lack of transportation to the gardens, especially for groups coming from Worcester. Tower Hill has worked with the Worcester Refugee Assistance Project to co-write grants for youth to take field trips to the gardens.

The Ramble will be unofficially open on the first day of Night Lights, which Elton said has already sold well over half of its 60,000 tickets. The ceremonial ribbon cutting will happen April 22.