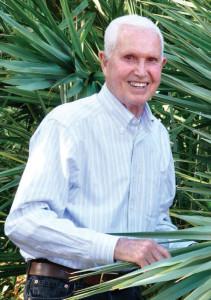 On November 17, 1930, John was born in St. Matthews, South Carolina to Isabel Strait Fairey and Philip Washington Fairey.  He was born into a family of amateur gardeners.  His mother, Isabel, had John and his three older brothers working in the family garden every summer of his youth.   In 1964, after receiving his Bachelor of Arts at Erskine College in South Carolina, attending four years of training at the Pennsylvania Academy of Fine Arts and a Master of Fine Arts at the University of Pennsylvania, John, like many South Carolinians in the 1800’s, made his way to Texas and was offered a teaching position at Texas A&M.   While at A&M John taught design to the potential architects and was known for his wit and wisdom.  He was a challenging professor, but earned life-long respect from his students and fellow faculty.  Many of John’s students stayed in contact with him, many, many years after they attended his classes.

In 1971 John acquired seven acres along a creek near Hempstead, Texas to begin what was to be his steadfast pursuit for the remaining years of his life.  Consistent with John’s self-deprecating wit, he named the property Peckerwood Garden.  With the early help of George Clary, John planned and began construction of what was to become a 39 acre property that is a repository of rare and unusual plants from the United States, Mexico and Asia as well as the site of an award-winning home designed by Texas architect Gerald Maffei. Beginning in the late 1980s John, along with Carl Schoenfeld, made multiple trips to the mountains of Mexico’s Sierra Madre to collect seeds and plant cuttings for the garden. In his lifetime, John made 100 trips to Mexico collecting specimens for the garden and providing many of those specimens to other botanical entities including Harvard University, University of California at Berkley, North Carolina State University, Royal Botanic Gardens at Kew, and Cholipo Arboretum Foundation in South Korea.

The Garden came to exhibit almost 3,000 species of plants as it meanders along grassy paths into surprising shapes, exhibiting multiple textures, colors and fragrances.  John described the Garden as “a living work of art and its own gallery.  It is much more than a collection of plants.  It, like all gardens, is a unique expression of the highest art form – one which utilizes all the senses in its creation, and satisfies them in presentation.”  In 1998, John established a garden conservation foundation to help maintain and expand the garden and the foundation’s successor, The John Fairey Garden Conservation Foundation, continues today and has plans to continue and expand on John’s work.

In addition to his horticultural accomplishments, John also collected Mexican Folk Art on his trips to Mexico.  In 2013, he donated over 400 pieces of the unique art to the Art Museum of Southeast Texas in Beaumont.
One of the accomplishments for which John was most proud was being asked to lead a Harvard University expedition to Mexico to locate the rare Taxus plant from which taxol is derived. Taxol is used in ovarian cancer treatment. The 1991 expedition located the plant and ultimately resulted in the successful extraction of taxol from the Taxus plant leaves.  A Mexican university now cultivates large farms to supply taxol for these treatments.

In 1996 John and Carl were awarded the American Horticultural Award for their botanizing exhibitions to northeast Mexico.  John was 2013 recipient of the Scott Medal and Award from Swarthmore College, Pennsylvania for his outstanding contribution to the science and art of gardening. In addition, in 2015, John received the American Horticultural Society’s highest honor, the Liberty Hyde Baily Award. The following year he received the Foundation for Landscape Studies Place Maker Award.  And in May of 2020, John was scheduled to receive the American Garden Club’s Medalist Award.

More than 65 articles have been published about John, the Garden and the Mexican Folk Art Collection, including in the Houston Chronicle, the Financial Times of London, Martha Stewart Living, Horticulture, New York Times, and Arte de Mexico.

In everything John did he strove for perfection.  He asked Texas architect Gerald Maffei to design the extraordinary residence that sits within the John Fairey Garden.  With its simple open floorplan and glass walls you sit and marvel at the constantly changing landscapes. Seeing and being captivated by the art work of Dixie Friend Gay, in his last days he commissioned and participated with the artist in designing a large mosaic wall to be placed at the Garden’s entrance.

John is survived by nieces and nephews who loved him and loved visiting him at the Garden. He is also survived by people who helped him create his masterpieces.  Carl Schoenfeld was a constant companion working to expand and make the Garden what it is today.  Connie Stegen worked tirelessly with John for decades helping to keep a handle on all the paperwork and on John.  Adolfo Silva was always at John’s side in the garden, offering his calm and sage advice.  And a special thanks to Ron James, one of John’s former students, who helped John over these last several years as his health declined.   And thank you to all the friends, former students and garden lovers who admired and supported this remarkable man for so many years.

Much of John’s legacy will live on as in his gift of the Garden to the John Fairey Garden Conservation Foundation and his outstanding collection of Mexican Folk Art to the Art Museum of Southeast Texas in Beaumont; as well as the lasting impressions he made as a teacher, designer, horticulturist and his sharing of new plants worldwide.

Those who wish, may make contributions in his name to the John Fairey Garden Conservancy Foundation, 20559 F.M. 359 Road, Hempstead, Texas 77445.