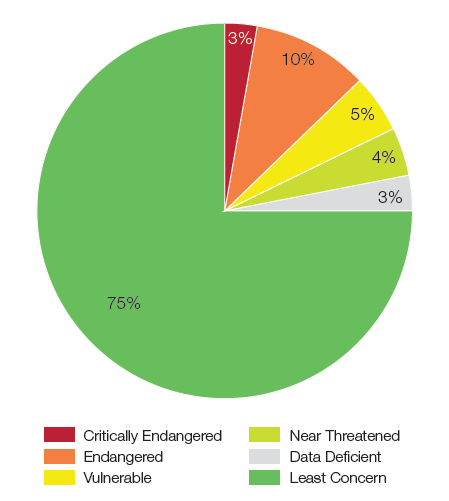 LISLE, Ill. and GLAND, Switzerland (September 20, 2017) - One-fourth of the United States’ oak species are now considered of conservation concern, according to data compiled by researchers at The Morton Arboretum for the latest update of the International Union for Conservation of Nature (IUCN) Red List of Threatened Species™. Sixteen species of oaks, all in the southern and western U.S., are now classified as Critically Endangered, Endangered, or Vulnerable on the IUCN Red List, with another four species deemed Near Threatened. This proportion of threatened species within a taxonomic group is similar to threat levels for birds and mammals.

Released today, the Red List of US Oaks publication details for the first time the distributions, population trends, and threats facing all 91 native oak species in the U.S., including updated versions of previously published assessments. The publication serves as a baseline for current understanding of the state of the country’s oak trees and an authoritative guide for future conservation action.

Known as keystone species, oaks in North America have more biomass and number of species than any other tree group; they are the backbone of many different forest communities and provide immeasurable ecosystem services. Yet, oak-dominated ecosystems have been in decline for the past century. The threats facing U.S. oak species include pests and diseases, habitat destruction, development, and agriculture. Notably, longevity and slow reproductive rates of oaks make them particularly susceptible to the effects of a rapidly changing climate. Until this report, it was not known exactly how many oak species in the U.S. were in danger of extinction using IUCN Red List methodology.

“In addition to being iconic and beloved tree species in many parts of the world, oaks support many important ecosystems, such as oak savannas in the American Midwest and cloud forests in Mexico and Central America. Countless animals and other plants depend on oak-dominated habitats for survival. So, as oaks disappear, there will be a tangible, negative impact on wildlife, potentially upsetting the balance of forest habitats,” said project lead Murphy Westwood, director of global tree conservation at The Morton Arboretum. “With the IUCN Red List assessments and associated report, we now have a baseline from which to determine how to best conserve oaks and reverse the trend toward extinction for these important trees.”

Adding to oaks’ struggle, acorns cannot be stored in seed banks through conventional preservation methods like most tree species, so growing them in living collections in arboreta and botanical gardens is imperative for long-term survival of the species. In partnership with the American Public Gardens Association and the U.S. Forest Service, The Morton Arboretum has a key role in a coordinated network of organizations growing and conserving threatened oaks, such as the Endangered shinnery oak (Quercus havardii), propagating thousands of acorns and cuttings, and distributing plants across the network. As the climate changes—models suggest the climate of Illinois will eventually be similar to that of today’s Arkansas or even Texas—the Arboretum and other public gardens may become critical refuges for even more oaks.

An ongoing effort
In 2015, The Morton Arboretum established a partnership with the IUCN Global Tree Specialist Group and Botanic Gardens Conservation International to assess all 450 of the world’s oak species by 2020, contributing to a global initiative to evaluate the threat level of the 60,065 species of trees in the world - the Global Tree Assessment.

The Red List of US Oaks report was funded in part by the U.S. Forest Service. For more information about the report, visit the website.

About The Morton Arboretum
The Morton Arboretum is an internationally recognized outdoor tree museum and tree research center located in Lisle, Illinois, USA. As the champion of trees, the Arboretum is committed to scientifically-informed action, both locally and globally, and encouraging the planting and conservation of trees for a greener, healthier, more beautiful world.  On 1,700 acres are 222,000 plant specimens representing 4,650 different kinds of plants, along with specialty gardens, educational exhibits, the award-winning Children’s Garden, 16 miles of hiking trails and the Visitor Center, featuring The Arboretum Store and the Ginkgo Restaurant and Café. The Morton Arboretum is a not-for-profit 501(c)(3) charitable organization, welcoming more than 1 million visitors and serving 44,900 member households in 2016. Learn more at mortonarb.org.

About the IUCN Red List of Threatened Species™
The IUCN Red List of Threatened Species™ is widely recognized as the most comprehensive, objective global approach for evaluating the conservation status of plant and animal species. From its small beginning, The IUCN Red List has grown in size and complexity and now plays an increasingly prominent role in guiding conservation activities of governments, NGOs and scientific institutions. The introduction in 1994 of a scientifically rigorous approach to determine risks of extinction that is applicable to all species, has become a world standard. In order to produce The IUCN Red List of Threatened Species, the IUCN Global Species Programme working with the IUCN Survival Commission (SSC) and with members of IUCN draws on and mobilizes a network of scientists and partner organizations working in almost every country in the world, who collectively hold what is likely the most complete scientific knowledge base on the biology and conservation status of species.