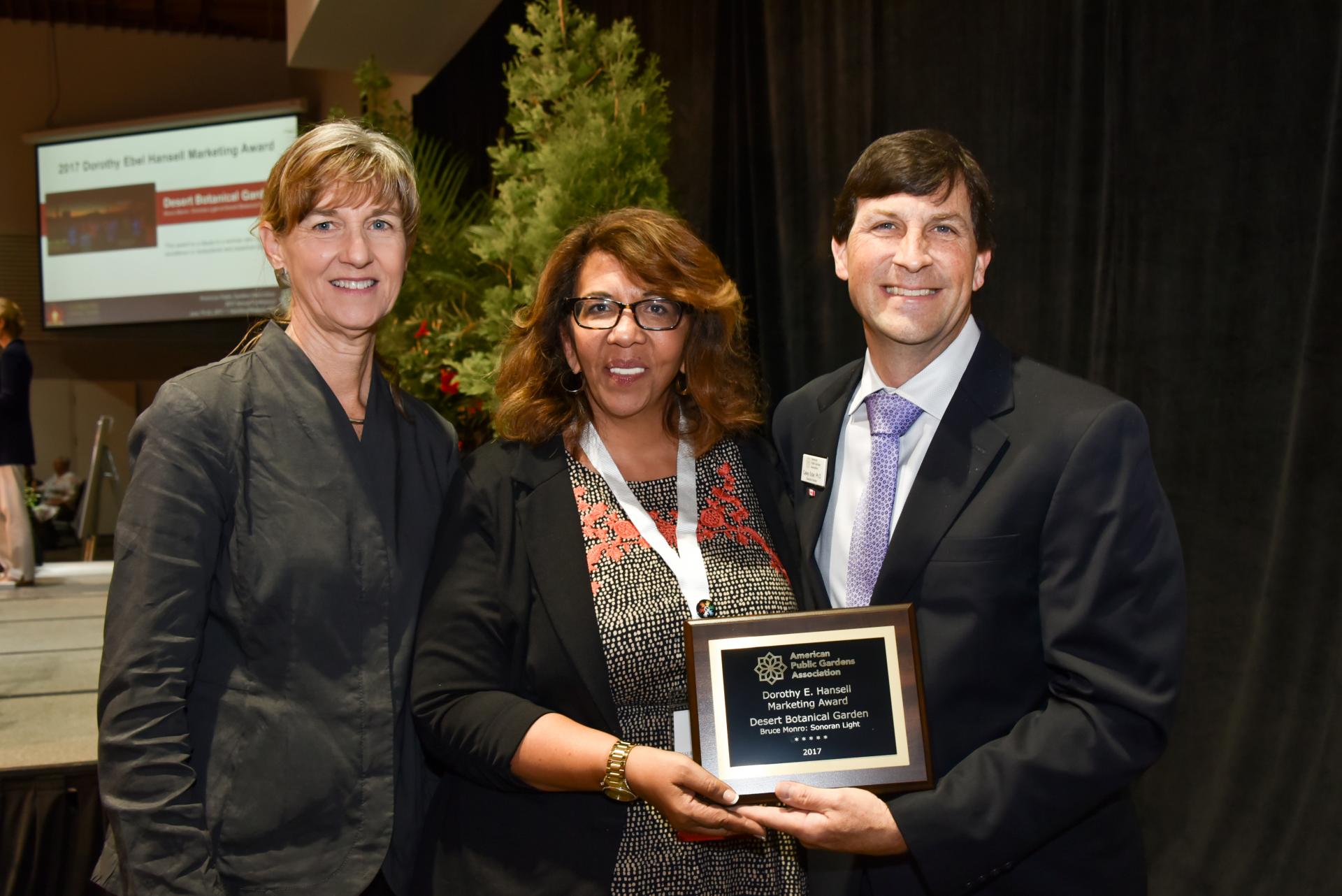 Kennett Square, Pennsylvania (July 6, 2017) – The American Public Gardens Association this week announced the recipients of its 2017 member awards. The awards honor the public horticulture industry's most influential and pioneering individuals and organizations. The award recipients were honored during the Association’s Annual Conference held from June 19-23, 2017 in Hamilton, Ontario, Canada.

“These awards allow us to recognize the best and brightest in the industry. It is an honor to showcase the remarkable leadership and achievements of our many exceptional members,” said Casey Sclar, Executive Director of the Association.

The 2017 American Public Gardens Association awards and recipients are--

o   Recipient: Eric N. Tschanz, has served as President and Executive Director of Powell Gardens for the past 28 years. He also has been an active member of American Public Gardens Association since 1985, serving on numerous professional committees and as a board member. In 1997 he became a member of the executive committee, serving as Vice President and President. In 2010 Eric was honored by the American Horticultural Society with their 2010 Professional Award. He received the Association’s Award of Merit in 2012.

Association Service Award: This award is reserved for an individual who has shown selfless service to the organization through work as a Professional Committee member, Service Committee member, and/or Board member:

o   Recipient: Nicola Ripley, Nicola is the Executive Director of the Betty Ford Alpine Gardens, a role she’s held for the last six years. She has worked at the garden for nearly twenty years in other capacities. She has also served on the Association’s Board of Directors for seven years, including a two-year term as President.

Award of Merit: The Award of Merit recognizes an American Public Gardens Association member who has performed with distinction in the field of public horticulture and has excelled as a public garden professional at one or more institutions. The recipient's accomplishments will encompass some combination of botany, horticulture, conservation, gardening, research, extension, education, development, or administration:

o   Recipient: Dr. Christopher Dunn, Dr. Dunn has been The Elizabeth Newman Wilds Executive Director of Cornell Botanic Gardens since 2014. He has served on the Board of Directors of the Association for 9 years, including as President.

o    Recipient: Kris Bachtell, Kris began his career in horticulture as a plant propagator in 1981 at The Morton Arboretum eventually advancing to his current role as Vice President of Collections and Facilities.

Professional Citation Award: The Professional Citation recognizes the significant achievements in public horticulture of an American Public Gardens Association member who has excelled in one of the disciplines generally associated with public gardens such as botany, horticulture, gardening, conservation, research, education, extension, development, or administration. A recipient may be at the early-to mid-point of their prestigious career:

Program Excellence Award: This award is reserved for an American Public Gardens Association Garden member who has displayed a truly innovative spirit in the development of an original program and has pioneered in one or more of the disciplines appropriate to public horticultural institutions, including education, conservation, development, botany, gardening, horticulture, research, extension, or administration:

o   Recipient: The Hands-on-Nature Anarchy Zone at Ithaca Children’s Garden (Ithaca, NY), a partnership with US Fish and Wildlife Service, invites visitors of all ages to take it to the next level and dig for worms, play with water sand and clay, build forts out of straw bales and stumps, climb trees, and more — and in the process get muddy, wet, and dirty while exploring their connection to nature.

Award for Garden Excellence: This award is given to a public garden that exemplifies the highest standards in horticultural practices. Recipient gardens are selected by peers:

o   Recipient: Naples Botanical Garden (Naples, FL) is a 170-acre subtropical public garden featuring immersive and engaging landscapes. Display gardens feature the cultures and collections of plants from the regions between the 26th latitudes, including Brazil, tropical Asia, the Caribbean, and Florida. A Children’s Garden introduces children and families to the natural world through engaging spaces.

Operational Sustainability Award: This award is given to an American Public Gardens Association member garden, or coalition of gardens, in recognition of their outstanding dedication and achievements in promoting sustainability through their programs, operation, facilities and/or research:

o   Recipient: Missouri Botanical Garden (St. Louis, MO) established sustainability as an institutional standard with a strategic plan in 2007. “We know the choices we make in building projects, horticultural practices, office systems, visitor amenities, and our public programs will have an impact on the future health of our garden and the planet”.

Kittleman Scholarship for Aspiring Public Garden Leaders: This is a new scholarship opportunity for up-and-coming leaders in the field of public gardens and was created to support this development by providing a “roadmap to leadership at all levels”:

o   Recipient: Sarah Gardner. Sarah has been in the public garden field for ten years, where she has enjoyed the unique chance to be front and center watching a Texas Discovery Gardens in Dallas, Texas, grow tremendously in terms of exhibits, recognition and mission over nine years.

These award recipients set a professional precedent for other individuals and organizations to follow. The nomination process begins in the fall and recipients are announced during the American Public Gardens Association’s Annual Conference each June. A ten-member committee, whose volunteers serve as leaders in the public garden community, selects the finalists and recipients.

About the American Public Gardens Association

Founded in 1940, the American Public Gardens Association has evolved to be the premiere association for public garden advocacy, education, innovation, and leadership in North America. With over 75 years of commitment to increasing cooperation and awareness among gardens, we have built a membership of nearly 600 institutions located in all 50 states, the District of Columbia, Canada, and 24 other countries. Its members include, but are not limited to, botanic gardens, arboreta, zoos, museums, colleges and universities, display gardens, and research facilities. The American Public Gardens Association is committed to increased awareness and advancement of public gardens as a force for positive change in communities through leadership, advocacy and innovation. Visit www.publicgardens.org for more information.