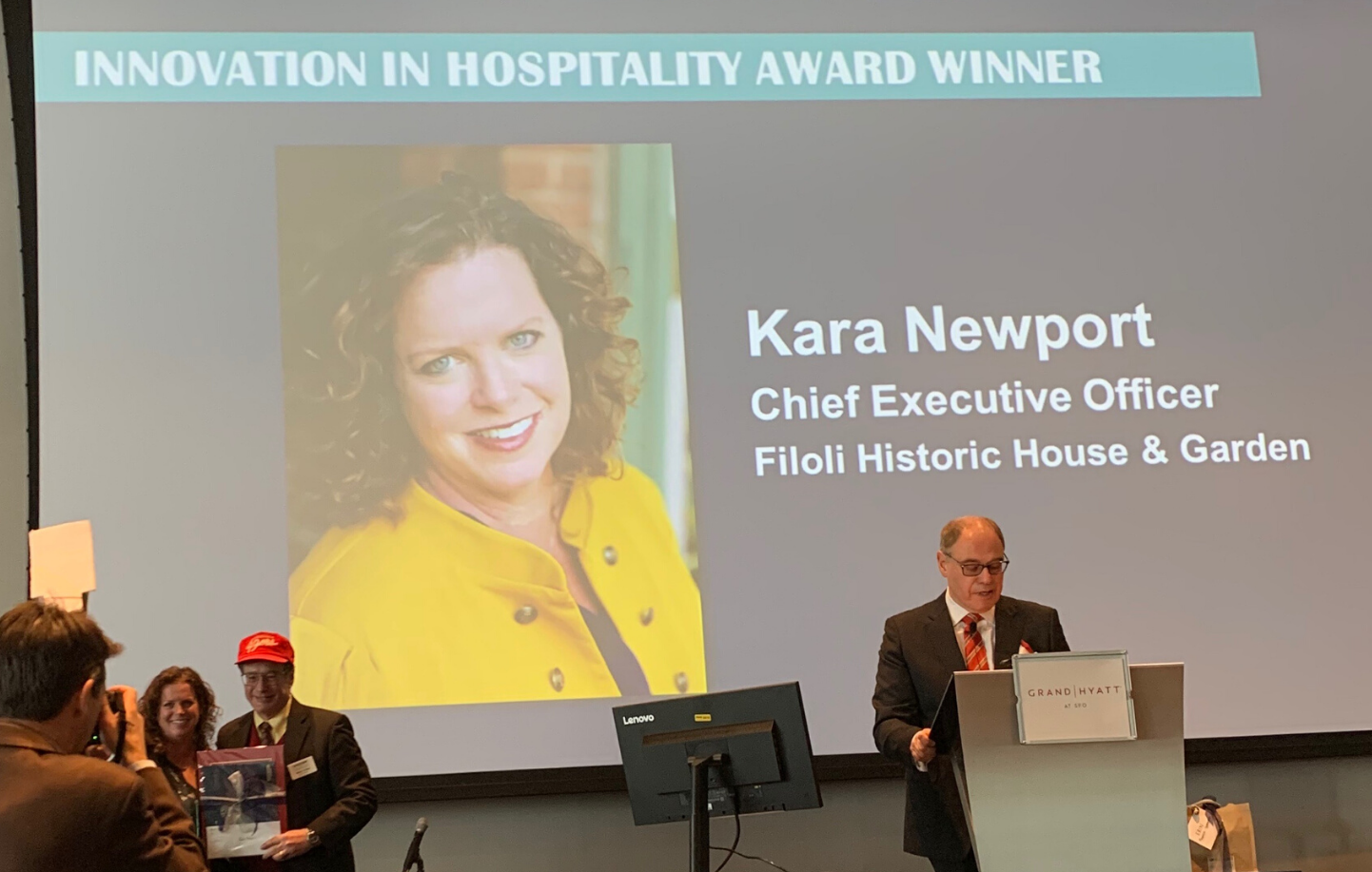 WOODSIDE, Calif., February 7, 2020 — Filoli Historic House and Garden, a site of the National Trust for Historic Preservation and one of the last country estates reminiscent of the Gilded Age, today announced that Kara Newport, Chief Executive Officer at Filoli, has been honored by the San Mateo County/Silicon Valley Convention and Visitors Bureau (SMC/SV CVB) with the 2020 Innovation in Hospitality Award. The award is given annually as part of the Peninsula Recognition of Passionate Service Awards program, designed to honor superstars in the hospitality and tourism industry for their hard work and dedication. As the Innovation in Hospitality Award winner, Kara is recognized as an individual who has made substantial, innovated contributions to her organization through the introduction of new ideas and methods.

“Kara has successfully led our organization through a period of significant change over the past three years, and she has charted a more inclusive and sustainable direction for Filoli moving forward,” said Susan O’Sullivan, Director of External Relations at Filoli. “Expanding our daily and seasonal hours of operation—one of Kara’s very first changes—made a huge impact, allowing more members of our Bay Area community to enjoy the beauty, history, and educational opportunities at Filoli. Now we’re open year-round and on select evenings, with a solid plan to keep Filoli culturally relevant for years to come.”

Kara became the Chief Executive Officer of Filoli in August 2016. Most recently, she led efforts to create a five-year strategic plan for Filoli that included cross-cutting themes of inclusivity, sustainability, and organizational excellence. This allowed Filoli to reimagine its mission statement, create a vision statement, and offer new seasonal programs—like Holidays at Filoli, which served more 30,000 visitors in the 2019 season. In addition, Filoli’s school programs have been realigned with California state curriculum standards and now serve over 6,000 Peninsula school children with field trips focused on nature, history, science, and art.

“Under Kara’s visionary leadership, Filoli has seen a nearly 50% increase in visitors, well representing the diverse and growing community of San Mateo County residents and guests,” said John Hutar, President and CEO of the SMC/SV CVB. “Filoli is well on its way to becoming an internationally known destination, recognized for its leadership in sustainability and its dedication to diversity in its board, staff, volunteers, and visitors. We are pleased to honor Kara with this award.”

“I’m so proud of how our organization has evolved and what we’ve been able to accomplish over the past three years, working together in new ways,” said Kara Newport, Chief Executive Officer at Filoli. “Innovation sounds a bit counter-intuitive for a ‘historic’ house and garden, but that’s exactly what’s needed to ensure Filoli thrives for another 100 years as a Bay Area cultural institution. I’m honored to receive this award and grateful to be part of such a welcoming, creative, and hard-working community.”

Award nominations were open to all employees of SMC/SV CVB partner organizations. The winners were selected by an independent panel of judges and announced on Friday, January 31, 2020 at the SMC/SV CVB Annual Meeting and Awards Ceremony held at the Grand Hyatt at SFO.  For more information about the San Mateo County/Silicon Valley Convention and Visitors Bureau, visit: www.visitsmcsv.com.