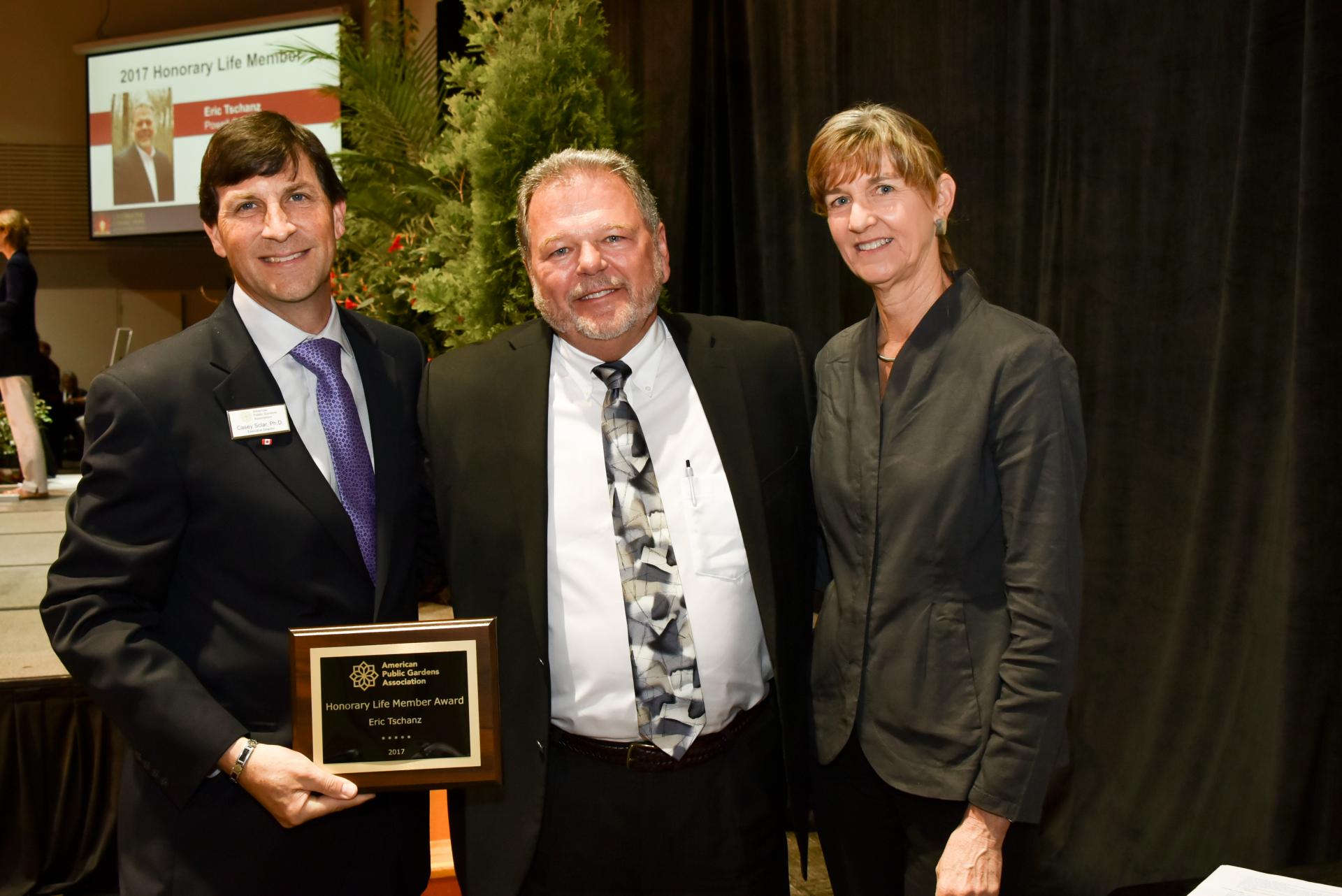 Kennett Square, Pennsylvania (July 6, 2017) – The American Public Gardens Association announced Eric N Tschanz as the recipient of the Association’s 2017 Honorary Life Member Award.  It was one of the many 2017 member awards given during the Association’s Annual Conference held in Hamilton, Ontario, Canada last month.

Eric Tschanz began his horticultural career in 1969 with a summer job at the Cox Arboretum in Dayton, Ohio. He completed his BS in horticulture at The Ohio State University and went on to become a Fellow in the Longwood Program at the University of Delaware and Longwood Gardens. After graduating in 1977 with a Master’s degree in Botanic Garden Management, Eric returned to the Cox Arboretum as the Horticultural Superintendent. In 1982 he accepted the position as the first Director of the San Antonio Botanical Gardens. During his seven years at the SABG he was instrumental in developing the first Xeriscape garden in Texas and in the construction of the Halsell Conservatory. For the past 28 years as President and Executive Director of Powell Gardens, he has implemented the first two phases of the Gardens’ master plan. He helped grow the gardens from a staff of 15 to today’s 52 FTEs. In 2008 he completed an over $9-million campaign and the construction of the new Heartland Harvest Garden—the largest edible landscape in the country. As the retiring director he is Vice Chair of the Garden’s $18.5-million capital/ endowment campaign.

Since 1985 Eric has been an active member of American Public Gardens Association serving on numerous professional committees and as a board member. In 1997 he became a member of the executive committee, serving as Vice President and President. He spearheaded the development of the Association’s Year 2000 strategic plan. He is an honorary member of the Garden Club of America—Westport Garden Club. In 2010 Eric was honored by the American Horticultural Society with their 2010 Professional Award. He received the Association’s Award of Merit in 2012. With Eric’s full retirement in September of 2017, he will have served over 48 years in the field of public horticulture. He is humbled to receive the Association’s Honorary Life Membership Award.

The Association award recipients set a professional precedent for other individuals and organizations to follow. The nomination process begins in the fall and recipients are announced during the Association’s Annual Conference in June.  An eight-member committee, whose volunteers serve as leaders in the public garden community, selects the finalists and recipients.

The 2017 American Public Gardens Association’s Annual Conference was held in Hamilton, Ontario, Canada from June 19th to the 23rd. The event was being hosted by two Hamilton-area gardens – the Royal Botanical Gardens and Niagara Parks. More than 600 professionals from public gardens across the United States and more than 15 countries worldwide attended the event.

About the American Public Gardens Association

Founded in 1940, the American Public Gardens Association has evolved to be the premiere association for public garden advocacy, education, innovation, and leadership in North America. With over 75 years of commitment to increasing cooperation and awareness among gardens, we have built a membership of nearly 600 institutions located in all 50 states, the District of Columbia, Canada, and 24 other countries. Its members include, but are not limited to, botanic gardens, arboreta, zoos, museums, colleges and universities, display gardens, and research facilities. The American Public Gardens Association is committed to increased awareness and advancement of public gardens as a force for positive change in communities through leadership, advocacy and innovation. Visit www.publicgardens.org for more information.