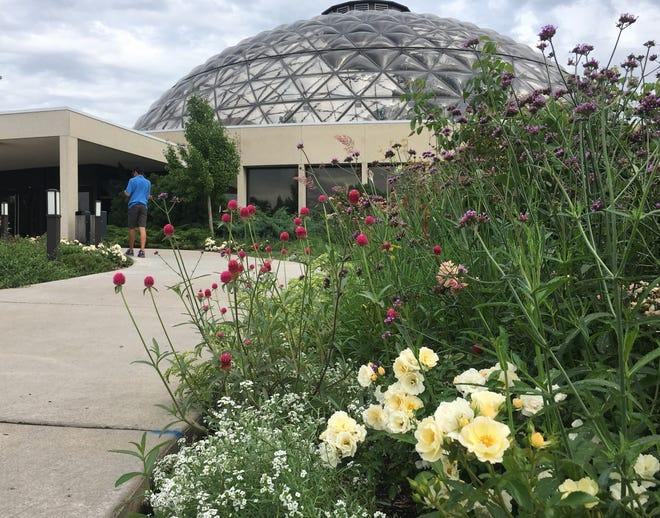 The Greater Des Moines Botanical Garden is preparing to develop the remaining 7 acres of its property that are not currently planted or open for guests.

Plans include a dry meadows garden that showcases Midwestern native plants, a natural amphitheater for the garden's educational programming, a new cafe along the Des Moines Riverfront, a lowland play area planted with willow trees and an elevated canopy walk that allows guests to stroll among the trees.

The entire project could cost up to $23 million. Officials with the Botanical Garden say they still are in the planning stages and have yet to begin fundraising.

Everything that's planned is based on the Botanical Garden's mission to explore, explain and celebrate the world of plants, said Jackie Pullen, chief operating officer. She presented the plans to the city's Urban Design Review Board as part of the botanical garden's ongoing lease agreement with Des Moines.

"The most important component is community engagement, the ability for people to gather and access to all for gardening," Pullen said.

The lease has been in place since 2013, and includes the 14-acre property where the botanical garden sits.

Behind the iconic dome are several outdoor gardens. About half, from the dome northward along the Des Moines River, are fully developed.

The remaining acreage — stretching to University Avenue, the I-235 pedestrian overpass, and the river — are the focus of the new plan.

The first project will be the dry meadows garden, featuring self-seeding annual native plants. It also will feature a sculpture by world-renowned artist Juanjo Novella.

Amid plants like asters, coneflowers and milkweed, which attract bees and butterflies, visitors will learn about the importance of preserving native species in order to protect declining pollinator populations, said Emmanuel Didier, founding principal of Didier Design Studio, the landscape architect working to develop the plan. Horticulturists with the Botanical Garden will curate an exclusive seed mixture for the space.

"It's really a celebration of the natural ecology," Didier said.

The dry meadows garden is expected to open in October.

Nearby, officials plan an amphitheater set into the natural topography. Overlooking the dry meadows garden, it will host classes and other Botanical Center programs.

Past those features, officials plan to build a River Cafe, which would include a place for guests to purchase food and drinks or use the restroom as they stroll among the various gardens. Outside the cafe, the Botanical Garden envisions raised beds planted with edible fruits and vegetables.

Next, in the lowest-lying area near the river, would be a willow garden with sand and water areas to play in, as well as spaces hidden among trees. Inspired by Ledges State Park, the idea is for families and children to "touch and smell and engage with the natural world" by playing and immersing themselves in it, Didier said.

"It can become very whimsical," he said.

Finally, the Botanical Garden plans a canopy walk, an elevated pathway that brings visitors through a heavily wooded area. The plan allows the Botanical Center room to make use of the wooded, hilly topography without having to remove trees for accessibility, Pullen said, though some invasive species will be taken out and replaced with natives.

"You're essentially walking through the trees," she said.

The canopy walk will be wheelchair friendly and will include places to rest and observe the rest of the Botanical Garden from a different vantage point.

In addition to the outside gardens, officials plan to spruce up the botanical garden's existing entrance, create connections to the riverfront and the I-235 overpass, and add an exterior entrance to the Trellis Cafe, which is currently only accessible by entering the dome or garden grounds. Garden leaders also are working on plans to take stewardship of the nearby Robert D. Ray Asian Garden, which is undergoing redesign and renovation.

Members of the Urban Design Review Board expressed excitement for the plan and praised the team's presentation.

"I think what you're developing here is a true asset to the city, the region and the state," said board member Steve Wilke-Shapiro.

Also, the board of the Greater Des Moines Botanical Garden announced it has hired Kim Perez as the garden's new CEO. Perez, an Iowa native, has served as president and CEO of The Cradle, a Chicago-area adoption agency, and as executive director of People’s Resource Center, a nonprofit helping low-income families there.

Stephanie Jutila resigned as president and CEO of the Greater Des Moines Botanical Garden in September.